A BBQ without meat doesn’t have to be boring, but at first I didn’t know how to do it. I often prepared veggie skewers but that was always a lot of work. The trick is putting the entire vegetable on the grill.

Don’t fire up the BBQ too hot (around 150-200°C, like an oven). If you can, leave some space on the sides without coal so you can move around veggies that are at risk of turning black.

Place a whole potato on the grill right at the beginning. They take about 40 minutes until you can cut them in half and eat them with a spoon. Drizzle with olive oil and cinnamon! It’s like a dessert.

Put them on with skin and all. The skin will turn completely black and that's okay. When they're soft on the inside, you can squeeze them out of the peels and eat the whole thing. You won't believe how delicious this is.

Place the entire aubergine on the grill, or directly on the charcoal, for about 10-15 minutes until it's very soft. If the skin turns black it's okay. Then cut it in half and with a spoon, scoop out the 'flesh'. Serve with a sauce made of creme fraiche, salt and pepper, and plenty of lemon juice.

Put the whole mushroom on the grill.

Turn regularly for about 10 minutes. Then spread some marinade on them: olive oil, cumin, paprika powder, salt, oregano

Cut a bell pepper (preferably the pointed, long ones) in half, put a piece of goat cheese or feta inside and wrap in foil. They're ready when the bell pepper is soft and the cheese has melted.

This isn't vegetarian but it's the most sustainable meat option. Most people are used to eating chicken breast, but in India I learned that chicken thighs and legs have a lot more taste. That’s because those muscles are used more, especially if it’s organic chicken. This prevents the meat from drying out and makes the perfect BBQ meat.

If you're doing this more often I can highly recommend a grill basket. You can cut all kinds of veggies, throw in a bit of goat cheese and put the whole thing on the grill and it will be very delicious. 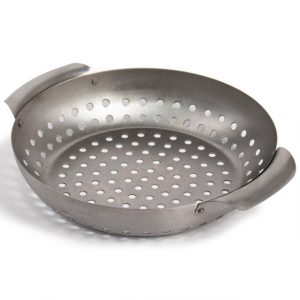